Pharma M&A is Too Expensive: Now What? 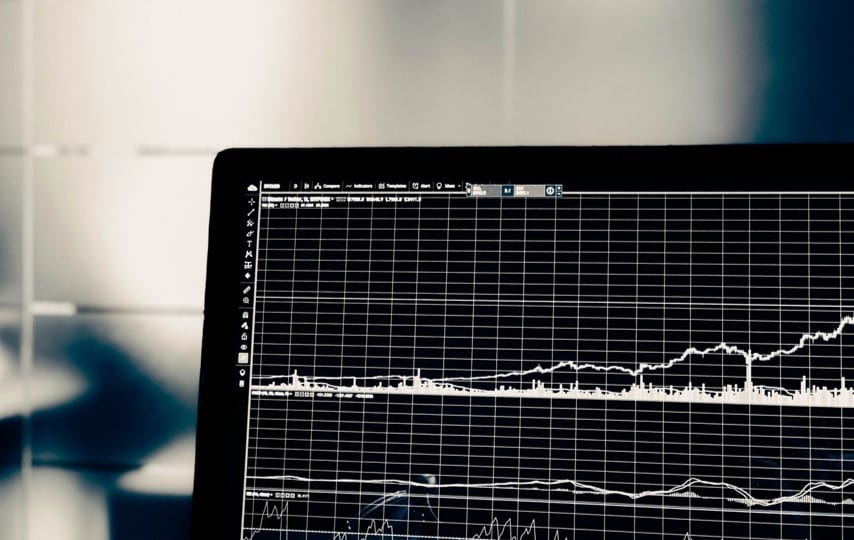 M&A has become an increasingly expensive method of securing new assets, capabilities and growth for pharmaceutical companies. This has been a natural consequence of the combination of an abundance of cheap capital with the relentless ticking clock of patent expiries. Cheap capital puts pressure on large firms to “do something”, and in most cases acquiring companies (at a price) can appear quicker and easier than building them. Patent expiries create the constant need for pharma companies to find profits from new products to replace those lost to genericisation. In this paper we argue that for most companies the price required to secure a company through M&A is now too high. We then suggest focused entrepreneurship as the response that will create value for the pharma companies’ owners and great medicines for patients and consumers.

Pharma M&A is too expensive for most

Over the last few years, Novasecta’s conversations with its diverse range of C-suite clients and members of its networks have been pointing to a common theme: for all but the very largest and most well capitalised companies, the amount required to pay for acquiring companies has become almost prohibitively expensive. CEOs and BD executives lament the fact that the price expected by a company to be acquired tends to make the corresponding business case involving expected future net cash flows extremely difficult to add up. So as 2016 drew to a close we initiated some deep-dive research into what is really going on with M&A prices.

To examine the trends over a five year horizon, we explored all global pharmaceutical M&A deals for which the deal size was disclosed from 2009-2011 and from 2014-2016, amounting to 254 deals and 316 deals respectively. We also analysed a subset for which the annual revenue of the acquired company was available, in order to examine the sales multiples (price paid by the acquirer company divided by the last year’s published revenue of the acquired company) as a broad proxy for the “price” a company has to pay to buy another company.

The conclusions from our research validated the insights we had drawn from our client conversations: pharma companies are executing more M&A deals of significantly higher value, paying much more for the revenue they acquire, and taking much more risk than they used to.

Deal Volumes and Values: More and Much Bigger

Pharma M&A deal values have increased significantly, with US and EU acquirers leading the way 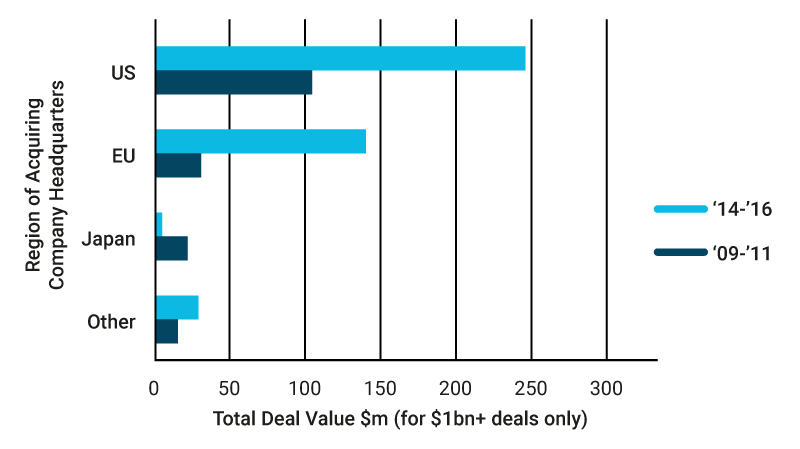 The dominance of US and EU headquartered acquiring companies in recent years is striking, with US companies responsible for 60% the total value of the larger $1bn+ deals. More recently European companies have joined in, having doubled their share of the larger deal value to 33% largely at the expense of Japanese companies that almost withdrew from large deals in the last three years. Takeda’s early 2017 announcement of its acquisition of Ariad for $5.2bn was therefore a rare exception to this trend. J&J’s announcement later in January 2017 of its $30bn acquisition of Actelion is more in line with the trend: the US’s combination of deep and hungry capital markets with large listed companies that have strong balance sheets and cash to spend is hard to compete with when assets become expensive.

We explored sales multiples as they have the advantage of capturing two related phenomena: (a) the “premium” amount that a company has to pay to acquire a given annual revenue stream, and (b) the degree to which the company is buying “hope” in the form of expected future revenue from either growing revenues from on-market products or adding revenue from R&D pipeline assets or both.

In addition to the more than doubling of deal values, our research shows that sales multiples have been starkly increasing, both over the five-year comparison period we chose (2009-2011 vs. 2014-2016) and more recently in every year from 2014 to 2016. Importantly the sales multiples have increased all deal size cohorts, which further reinforces the concept of “over-paying”, as it is not just that acquirers are taking more risk on by acquiring companies that have more to do to grow revenues.

Median sales multiples are up for all sizes of deals 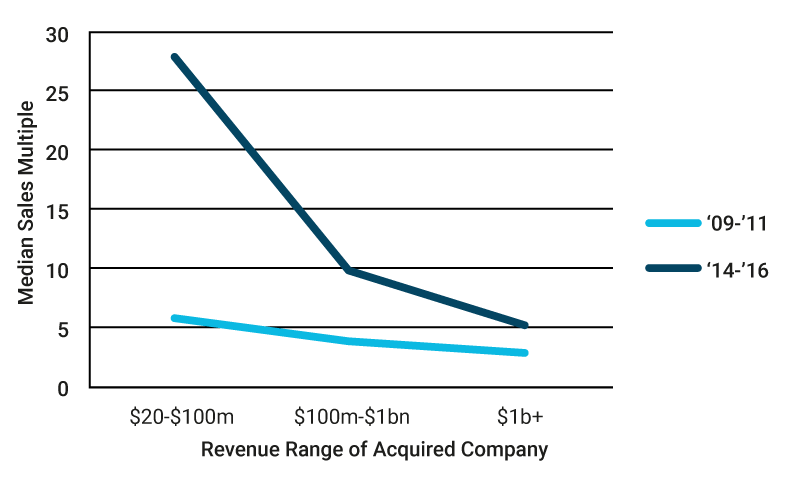 It is notable from this analysis that the median sales multiples for acquiring companies that already had revenue of $1bn+ per year have increased from 2.7x to 5.2x. So it is not just that pharma companies are acquiring more risk than before: when acquiring a company that has revenues of $1bn+, one is typically acquiring on-market revenue, and pharma now has to pay almost twice as much for this privilege than they had to only five years ago. Again the more recent J&J-Actelion deal illustrates this phenomenon very well, with J&J paying around 15x revenue for a company with ~$2bn of reported revenues.

The sales multiple that acquirers pay for the companies they buy is a good proxy for how much risk that the acquirer is taking, as in addition to the “price” effect discussed above, very high multiples also suggest that the acquired company has either strong growth potential or earlier stage assets or both. In each case this means more risk for the acquirer. And acquirers are taking it on: the number of deals with 100x+ sales multiples has increased five-fold in just five years.

This has been at the expense of deals where the acquiring company has revenues and therefore usually less commercial or scientific risk. The number of lower-risk deals with less than 5x sales multiples is now a third of what it was five years ago. 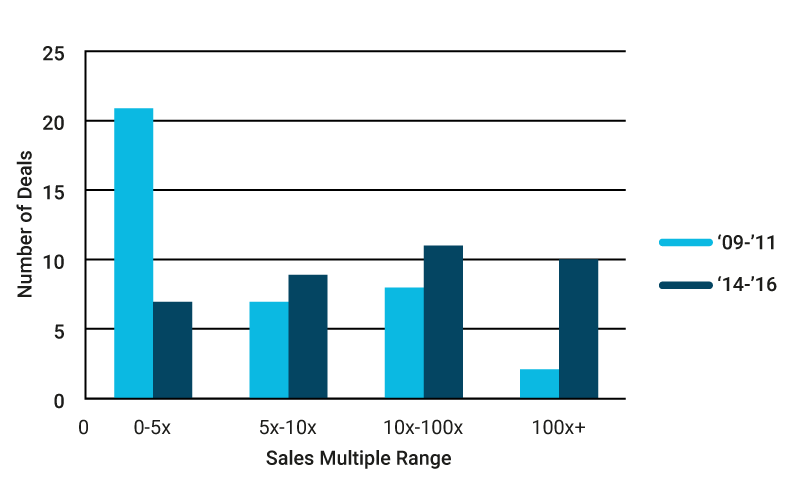 In sum, M&A has become an increasingly expensive way to grow pharma businesses. If it can genuinely catalyse and improve the performance of the acquiring company, through some synergistic effect that is more than short-term cost saving, then it can make sense. But the sheer volume and value of deals being done at prices that are substantially more than only five years ago suggests this is not always the case.

Now what? Focus and Strategic Collaborations

One response to the inflation in M&A prices is to simply pay up and think very long in terms of potential return. Our experience with a diverse range of companies, particularly those that are privately held or controlled, is that this is insufficient. We live in highly uncertain political and economic times, and raiding the balance sheet for hope is a risky strategy even in good times.

The good news is that necessity is the mother of invention. Entrepreneurial pharma companies, are already responding to the M&A issue in two ways: First by focusing on what they can really do best, and second by looking to strategic collaborations with other pharma companies, where capabilities and assets can be “traded” in ways that create strength for both parties. In both cases, bespoke is best: building distinctive R&D and commercial capabilities in chosen areas of focus, and finding the right strategic collaborations to complement these, is a more reliable path to sustainable advantage than over-paying for M&A. 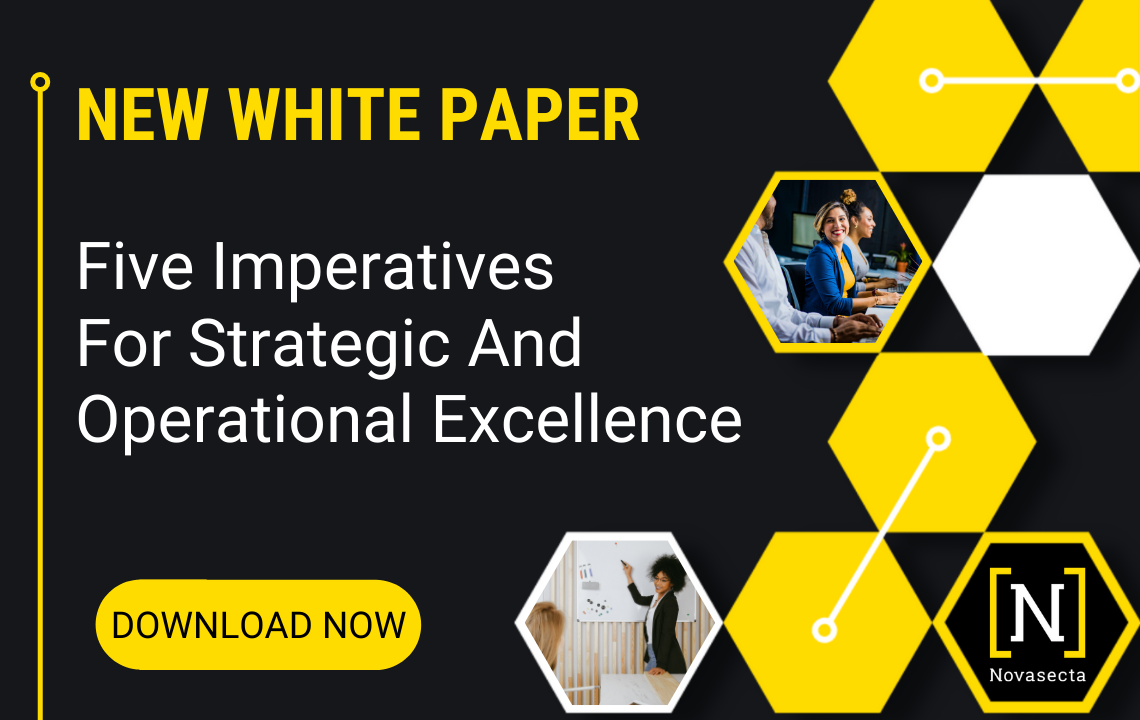 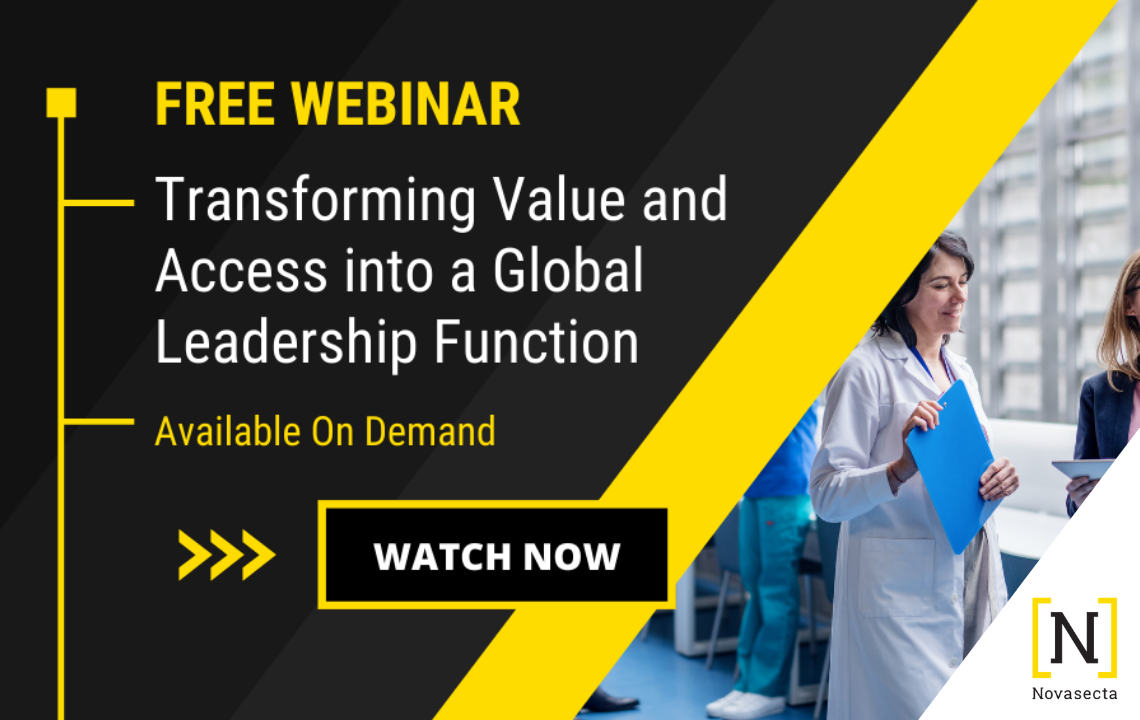 Transform Value And Access Into A Global Leadership Function 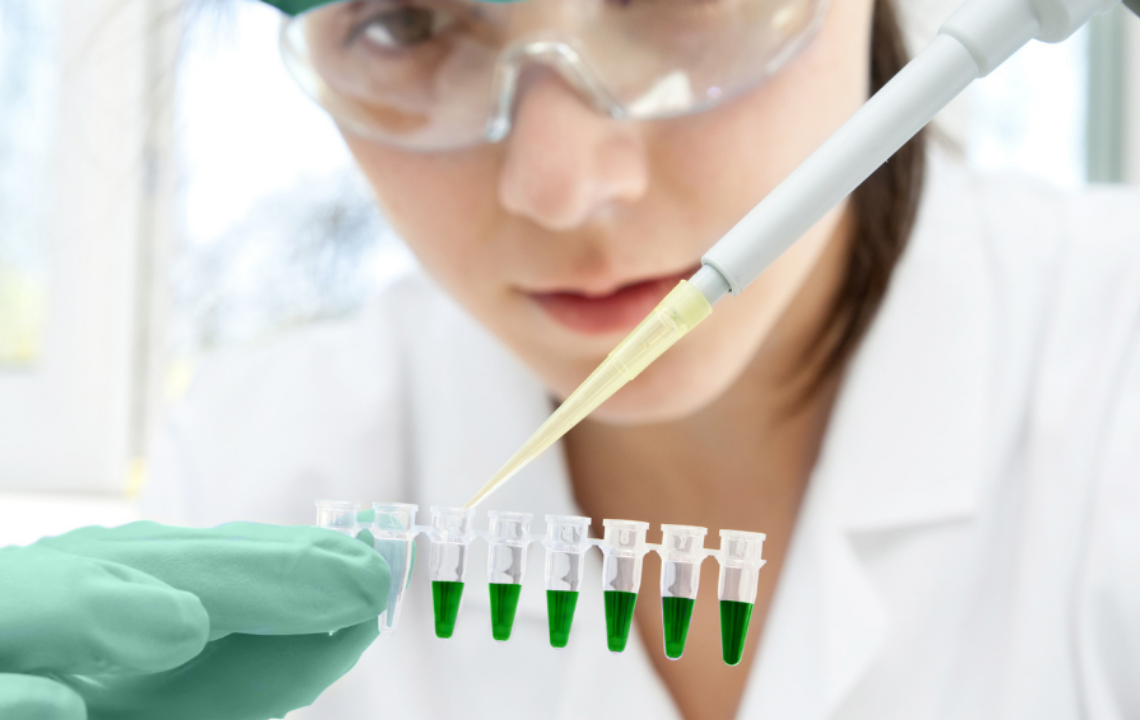